She’s the Queen Bee, YO! 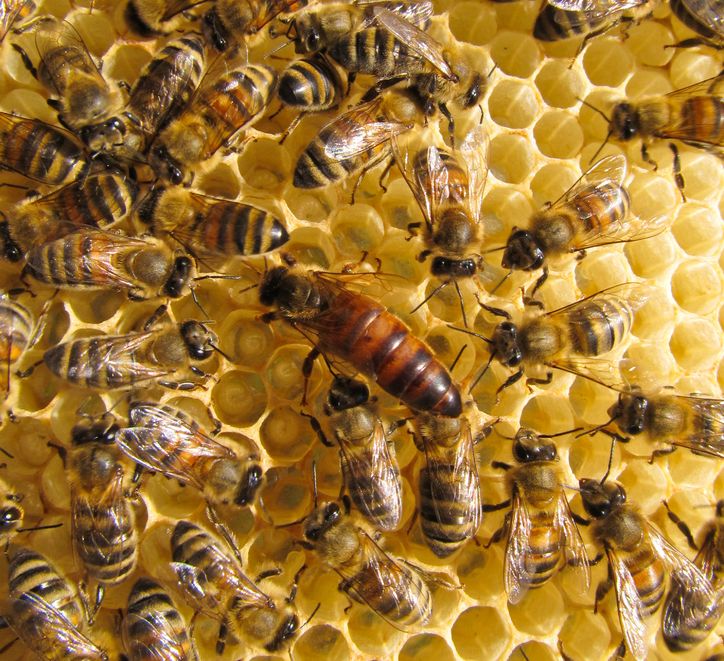 Honeybee colonies are one of nature’s most intriguing socially structured insect communities. Worker bees do nearly everything from food collecting, raising the young, and building the hive. Drones help keep the hive’s temperature level correct, and become the one-time mate of another colony’s queen bee. The queen bee is responsible for her colony’s continuance only to eventually either be held accountable by her colony or die purposely.

All worker bees and drones are critical to the hive, but being the queen of a hive is no joke! There are three reasons a new queen bee will join a colony: superseding a dying queen, replacing a lost or dead queen, or for swarming. Unless it is an emergency situation, a new queen is groomed for queen-hood at the larvae state which includes large amounts of royal jelly. When the queen emerges, she will fly away from the hive to mate with up to 15 drones from other colonies. If she is to supersede her mother, the new queen may stay with the old queen for a period of time.

After she has mated and returned to the hive, the queen bee starts laying eggs within several days. Depending on the time of year, she can produce up to 1,500 eggs per day. As she lays smaller eggs, the queen decisively discharges sperm into them. These eggs will produce worker bees (or a potential queen replacement when it is time), who are all female. When a wider egg is passing through her oviduct, she will leave them unfertilized to become the male drones.

While laying eggs, the queen bee is constantly surrounded by worker bees. There are many different tasks these bees take on and they generally stick to one task for their short lifetime of a few weeks to a few months. One specific and critical task is to serve the queen by feeding her royal jelly. While she is already busy with eating and producing eggs, the queen bee also produces pheromones to share with her colony. The pheromones shared with her workers are spread throughout the hive, signaling the queen bee’s health, which has a domino effect on the pheromones that her colony produces and how they behave.

If she is an effective queen, her colony will thrive and the hive will be strong. In the short term, her entire honey bee colony can be replenished through natural life-cycles within a few months. In the long-term, however, an effective queen may live for a total of 2 to 7 years.